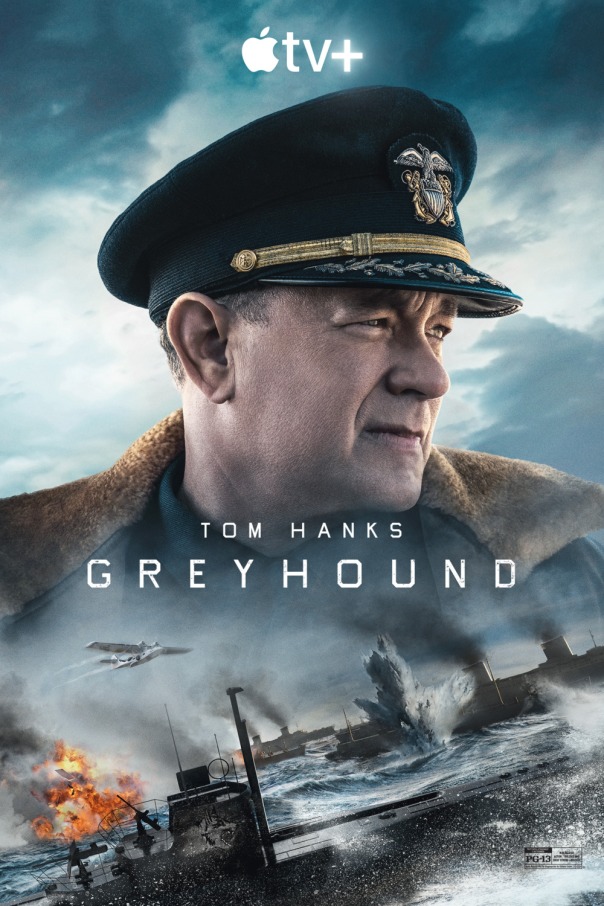 Ernest Krause is the latest addition to Tom Hanks’ battalion of onscreen captains, a tight-lipped, all-business Naval commander who could be cousins with his Captains Phllips and Sullenberger, or before them astronaut Jim Lovell in “Apollo 13” and the fictional Captain Miller in “Saving Private Ryan.” Krause silently says grace before he eats and the sailors on his ship apologize if they curse in his presence, but Hanks doesn’t play the part as a prig. He’s a stalwart leader and an American ideal, a model of the upright decency Tom Hanks seems to so easily embody both onscreen and off. He’s so good at playing this kind of part I think we sometimes take him for granted.

The taut, no-nonsense WWII thriller GREYHOUND fits so snugly in Hanks’ wheelhouse it’s not a surprise to find he wrote the screenplay himself. Adapted from C.S. Forster’s 1955 novel “The Good Shepherd,” it’s a lean and mean high seas adventure clocking in at a swift 91 minutes. The story is simplicity itself–Krause’s destroyer (call sign: Greyhound) is in charge of escorting a 37-vessel supply convoy across the North Atlantic to Liverpool. Too far out at sea for air cover, they must traverse a stretch known as “The Black Pit” while the convoy is besieged by “a wolfpack” of German U-Boats. It’s both a harrowing journey and very much just another day at the office for the United States Navy.

This is Krause’s first command, but the job requires that he hide any fears or misgivings from his eager, achingly young crew–all packed together like sardines in these tiny quarters. (A lot of scenes were shot in the actual tight confines of the USS Kidd, as opposed to the more spacious soundstages of most Hollywood war movies. There isn’t enough room in here to change your mind.) Hanks and director Aaron Schneider geek out on procedural verisimilitude, as we follow orders shouted down the chain of command and wonky matters like when hats should be exchanged for helmets, etc. We come to understand the inner workings of the warship and learn to follow the jargon in a film where most dialogue consists of everybody yelling stuff like “HARD RIGHT RUDDER!”

The only two people on board in whom Krause can confide are is his XO Cole (played with great warmth by surly British fireplug Stephen Graham) and to a lesser extent the ship’s cook Cleveland (Rob Morgan) who’s the only person who prays with him and keeps bringing meals the captain never has time to eat. The movie’s stripped-down minimalism plays particularly to these actors’ strengths. Hanks has developed at least a dozen different ways of narrowing his eyes, and subtly shows us everything the commander would never dare say out loud. Without making a big fuss over it, “Greyhound” is a movie about the burden of leadership, the life-and-death decisions that must be made in split-seconds. We watch how heavily they weigh on heroes.

Vestiges of the destroyed U-Boats appear on the ocean’s surface as debris-strewn oil slicks, with a sickly crimson tint like floating clouds of blood. “Fifty less krauts!” a young sailor cheers. “Fifty souls,” Hanks corrects him. “Greyhound” is the rare WWII movie that doesn’t go in for any jingoism, regarding these admittedly thrilling battles as a sad but necessary duty. Young sailors celebrate while officers like Krause have seen too much in this war to take part in any such displays. After “Private Ryan,” “Band of Brothers” and “The Pacific,” some have complained this milieu is a bit overfamiliar for Hanks, something I believe he himself indirectly acknowledges by showing his character stepping into a comfortable pair of slippers on the bridge.

“Greyhound” has a much narrower focus than a lot of Hollywood war pictures–it’s at least an hour shorter than most of them–and I greatly appreciated both the economy of the storytelling and its immersive evocation of seafaring life. Indeed, the movie’s one major misstep takes place on dry land–giving Krause a cardboard love interest in Evelyn (Elisabeth Shue) who he can have brief flashbacks to happier times with at dramatically opportune moments. Their short scene together is shockingly generic and seems to take place on another planet altogether. Hanks and Schneider should have known you never get out of the boat.•••