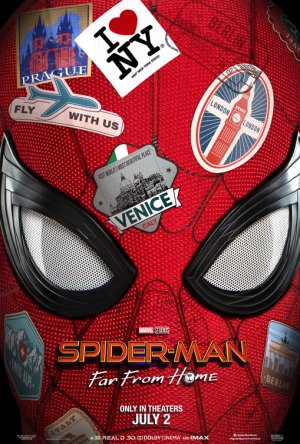 E.D.I.T.H. is a massive satellite drone defense system that represents the latest and greatest from Stark Industries, with a characteristically snarky acronym that stands for “Even Dead I’m The Hero.” Yep, while Robert Downey Jr. may have gone off to the great expired contract in the sky, his beloved Tony Stark is nevertheless still stealing scenes and sucking all the oxygen out of the room from beyond the grave. SPIDER-MAN: FAR FROM HOME – by my count the third second Spider-Man movie – is also the second live-action webslinger adventure in a row during which Peter Parker gets lost in the long shadow of his Marvel Cinematic Universe mentor. Even dead, Tony’s still all anybody ever talks about.

Which is a damn shame, as Tom Holland makes for an awfully appealing young wall-crawler, and returning director Jon Watts has once again surrounded him with a charismatic cast of awkward teens, including Peter’s portly sidekick Ned (Jacob Batalon), all-business Betty Brandt (Angourie Rice), Instagram asshole Flash Thompson (Tony Revolori) and – best of all – Zendaya’s delightfully deadpan MJ, who’s a Gen-Z Wednesday Addams and the girl of Peter Parker’s dreams. Everything with these kids is aces, and whenever “Far From Home” chills out for long enough to be an easygoing teen comedy, you’re tantalizingly teased with how much fun these Marvel movies can be when they cool it on the overbearing mythology and apocalyptic showdowns.

“I didn’t think I had to save the world this summer,” complains Peter, who would really like to take a breather from this whole superhero business and enjoy his class trip to Europe. Alas, duty calls in the form of surly Nick Fury (Samuel L. Jackson, receiver in hand) requiring assistance in battling a scourge of giant water and fire monsters wreaking havoc on the most tourist-friendly overseas cities. While Parker is waffling, in flies Mysterio, a roguishly handsome new superhero wearing a fishbowl on his head and a freshly ironed cape, played with musky, Shatner-ian brio by Jake Gyllenhaal.

It’s almost clever in the way Peter’s dilemma matches our own – we would also much rather just enjoy the field trip and his funny friends, rather than endure another round of weightless CGI setpieces of mass destruction. “Far From Home” is stuck cleaning up after the cataclysmic, world-changing events of “Avengers: Endgame,” amusingly putting the most laborious exposition in the mouths of blase teenagers who got over it all already. (Rice has a very funny moment in which Betty’s steamed that she and other kids who were resurrected in the last film had to start their entire school year over from scratch, even though they’d already taken their midterms when Thanos snapped them into dust.)

But the logistical issues inherent in three billion people suddenly coming back from the dead are glossed over in favor of more hysterical mourning for Tony Stark, whose smarmy visage appears on murals everywhere Peter goes, as well as in an amusingly cheeseball tribute video created by his classmates. (I didn’t keep count but wouldn’t be surprised at all if the words “Tony Stark” were uttered more than “Peter Parker” in this film.) Much in the way 2017’s “Homecoming” diminished Spidey’s story into a feature-length audition for The Avengers, this time around everyone keeps asking if he’s going to be “the next Iron Man” – a question the movie answers depressingly in the affirmative.

Without getting into too many spoilers, let’s just say that by the final act Peter has inherited not just Tony’s tech but also his sidekick Happy (Jon Favreau) and several of Stark’s arch-enemies, doing battle with a swarm of deadly drones in a machine-gun-crazy action sequence indistinguishable from the cluttered climax of any “Iron Man” movie. (Spider-Man’s web-shooters don’t even work.) I didn’t care about any of it. I just wanted to see if Peter finally got up the nerve to ask MJ out on a date.

Sam Raimi’s swoony “Spider-Man 2” and last year’s astonishing animated “Spider-Man: Into The Spider-Verse” are probably the two best superhero movies of the modern era. What they understood about the character that these MCU movies miss is that we love Spider-Man as an overwhelmed underdog. He’s broke, with a threadbare costume relying on his wits, always late for school and trying to finish his homework when he’s not out fighting crime. He’s your friendly, neighborhood Spider-Man, not the jet-setting ward of an asshole billionaire with all the high-tech toys in the world at his sticky fingertips.

There’s an in-jokey monologue during which the film’s not-so-secret villain complains about having to come up with ever more elaborate “Avengers-level threats” to keep wowing an increasingly jaded populace that’s seen it all over these past 23 films. But what the MCU doesn’t realize is that all their toppling towers and giants made of fire are deathly dull compared to the thrill of two kids sneaking past the chaperones to go out on their first date. There’s an incredibly charming high school romance in “Far From Home,” but it’s buried under “Iron Man 4.”•••

Over the past twenty years, Sean Burns’ reviews, interviews, and essays have appeared in WBUR’s The ARTery, Philadelphia Weekly, The Improper Bostonian, Metro, The Village Voice, Nashville Scene and RogerEbert.com. He stashes them all at Spliced Personality.