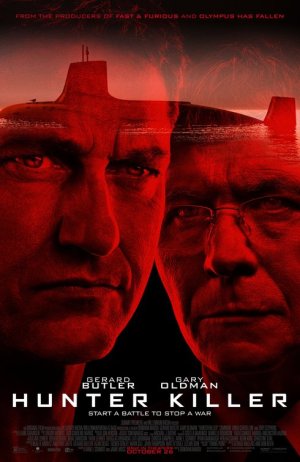 HUNTER KILLER is a serviceable action film that hits the expected notes of the subgenre of, well, the sub genre. Joe Glass (Gerard Butler) is the newly appointed captain of a submarine that is sent into Russian waters to learn what became of a previous American sub that has disappeared. The twist is that he’s not an Annapolis graduate who has been groomed for leadership, but someone who has worked his way up through the ranks.

It takes a while before we learn what is really at stake and so it won’t be revealed here. Suffice to say tensions are rising and a wrong move could move the two countries towards World War III. Based on a thriller novel (“Firing Point”), the film juggles several settings and groups of actors who may be working at cross-purposes. In Washington, the chairman of the Joint Chiefs of Staff (Gary Oldman) is ready to strike hard, while an admiral (Common) and an NSA operative (Linda Cardellini) seek an alternate way out. To that end, a group of special operatives has been sent in to try to learn what’s going on at the Russian naval base.

When the complexity of the situation is revealed, Glass has to reach out for help from the captain of a Russian sub (Michael Nyqvist), who has to be convinced that working with Glass is not betraying his country. This is only one of the things that causes some of the crew to question Glass’s decisions, with his executive officer seeming to be on the verge of mutiny.

Butler’s action films sometimes venture into camp, as with “London Has Fallen,” but “Hunter Killer” plays it straight, as does Butler. Even the clichés of the sub genre – diving so deep that the submarine is endangered, having to remain utterly quiet to avoid detection – are treated seriously so that a moment that could have generated laughs instead gets gasps. Credit director Donavan Marsh for not condescending to the material as well as getting us to feel the claustrophobic confines of the submarine.

While Butler is the anchor for the film, the film also has a solid cast in supporting roles. The tension between Oldman and Common, as two naval officials with different approaches, is palpable. Likewise, Nyquist conveys a career Russian naval officer trying to thread the needle in figuring out what course of action to follow. If the plot sometimes falls into melodrama, the characters and how they face various challenges makes this more than just another action film.

No one will confuse “Hunter Killer” with the Oscar bait and holiday blockbusters that will fill the movie schedule for the remainder of the year. Like the recent “Halloween,” it is an unapologetic genre film that treats its material – and the audience – with respect.•••

Daniel M. Kimmel is a veteran movie critic and author of a host of film-related books. His new novel, Father of the Bride of Frankenstein, will be released in January. He is the 2018 recipient of the Skylark Award given by the New England Science Fiction Association. He lives in Somerville, Massachusetts.