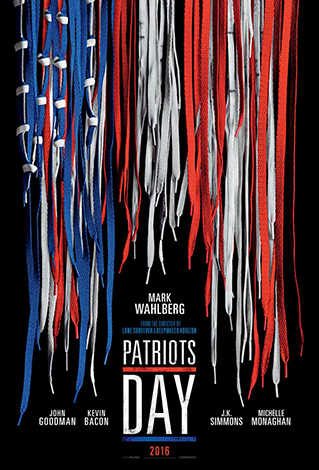 Tommy Saunders wasn’t even supposed to be on the finish line that morning. Coming off a suspension for insubordination, the foul-mouthed Sergeant’s final act of contrition to Police Commissioner Ed Davis was putting on a fluorescent vest and walking a beat at the Boston Marathon. He may have complained that he “looked like a crossing ghad” but luckily for all of us, Tommy was there. He was the first one to go running towards the blast while all the other cops stood around dumbfounded. Tommy took command of the scene, bringing in the ambulances and telling all the highly trained medical personnel exactly what to do. I shudder to think how many more lives would have been lost on April 15, 2013 if Tommy Saunders hadn’t been there that morning.

Over the sleepless nights that followed, Sergeant Saunders’ heroism was unparalleled. Everything you heard on TV from Commissioner Davis or FBI special agent in charge Richard DesLauriers was actually Tommy’s idea first. “I worked homicide, what solves cases are witnesses,” he explained to the clueless bureaucrats in their command center, inspiring them to take the crazy, unprecedented step of asking people who were at the scene of the crime to describe what they saw. Tommy Saunders was everywhere during those crucial days. It was Tommy who located the surveillance tapes that gave us our first chilling glimpses of the Tsarnaevs. He was the officer who took the statement from carjacking victim Dun Meng, after which Tommy led the Watertown police in the firefight that shook the neighborhood to its foundations. Tommy’s the one who spotted the blood on David Henneberry’s boat in the backyard, resulting in the arrest of Dzhokhar Tsarnaev and putting an end to our city’s horrible nightmare.

Oh and by the way, Tommy Saunders doesn’t exist. He’s a completely fictional character played by producer-star Mark Wahlberg in director Peter Berg’s revolting new film PATRIOTS DAY–as disgraceful an exploitation of real-life tragedy as I’ve ever seen. Everyone involved in this movie should be ashamed of themselves. In the weeks running up to its release, we here in Boston have been hearing a lot of gaseous pronouncements from the principals claiming they made the film as a tribute to the heroes of that awful week in April. Unfortunately, our obsequious local media lacks the nerve to ask Wahlberg and Berg why they invented a fake person to take credit for everything that was accomplished by the folks they’re allegedly honoring.

The few of us who saw Berg and Wahlberg’s $150 million money-loser “Deepwater Horizon” back in October know their formula already: the former-underwear-model-turned-hamburger-salesman plays a flawless-yet-humble salt-of-the-Earth fella who runs around a factually dubious depiction of a tragic event, super-heroically saving the lives of the supporting cast so they can all spend the last ten minutes of the movie thanking him in slow-motion while sad music plays. The narcissism is grotesque. In “Patriots Day,” Wahlberg can’t even walk down the street without people stopping him just to say what a great guy he is. After every big scene, someone in the cast takes a moment to tell Tommy he did a good job, and thanks him for being there.

Davis (played by John Goodman) and DesLauriers (Kevin Bacon) defer most of their decisions to the uniformed Sergeant, while future commissioner Bill Evans (James Colby) puts the manhunt on hold for a monologue about “the big haht hiding inside of Tommy Saunders.” The movie spends so much time fellating its bogus hero, were it about an actual living person “Patriots Day” would feel like a North Korean propaganda film. But instead it’s just the tasteless delusions of a vain movie star recreating his hometown’s most horrifying moments so he can dress up and play policeman. A few years ago Wahlberg famously claimed he could have stopped 9/11 if only he had been on one of the planes. These fantasies of inserting himself into national tragedies are something he really should be discussing with a therapist.

“It’s all about love. Love will always beat hate,” Tommy says at one bizarrely unmotivated moment. It’s a sentiment that gets a lot of lip service in a movie that provides very little to back it up. What “Patriots Day” values is brute force. As a filmmaker, Berg’s got an authoritarian streak a mile wide and he loves nothing more than men in uniform. His first Wahlberg team-up, “Lone Survivor” was basically a recruiting ad in which everybody dies, and even a dumb alien invasion movie based on the game “Battleship” in Berg’s hands became a love letter to the United States military.

Here he fetishizes the big black SUVs and long guns, with one shot after another of manly men striding purposefully amongst flashing lights and sirens. After over-scaling the Watertown shootout into a car-flipping extravaganza better suited for a “Fast & Furious” sequel, “Patriots Day” can’t be bothered to question the trampling of civil rights (“No Miranda!” is shouted at one point) and Berg carefully elides the fact that Tsarnaev wasn’t found until after the lockdown was lifted. “Patriots Day” makes martial law look wicked awesome, bro.

Only Blue Lives Matter here, as MIT patrol officer Sean Collier’s murder is teasingly foreshadowed throughout like a snuff film, but the movie can’t spare a single word for victims Krystle Campbell or Luingzi Lu. Martin Richard’s family reportedly requested that his name not be used in the film, so he’s simply referred to as “the eight- year-old dead kid under a blanket.” The filmmakers have no time for civilian heroes like Carlos Arredondo, who you surely remember as the man in the cowboy hat from that iconic finish line photo. Here he’s been erased from history to make more room to celebrate the phony white movie star hero.

Before the closing credits roll, “Patriots Day” tacks on almost ten minutes of interview footage from some of the story’s real-life subjects, all of them offering canned aphorisms that sound over-rehearsed. It feels like a pre-emptive bid for exoneration by the filmmakers, proof they got permission to cash in on a city’s still-tender memories in order to massage the ego of their superstar producer. Without this documentary material, the movie would have ended on a shot of David Ortiz shaking Mark Wahlberg’s hand, the real slugger thanking the fake cop for his heroic service.•••

Over the past seventeen years, Sean Burns’ reviews, interviews and essays have appeared in Philadelphia Weekly, The Improper Bostonian, Metro, The Boston Herald, Nashville Scene, The House Next Door, Time Out New York, EntertainmentTell, Philadelphia City Paper and RogerEbert.com. He stashes them all at Spliced Personality.