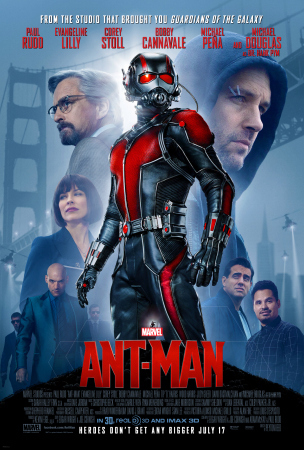 ANT-MAN helps illustrate that the ever-expanding Marvel Universe knows no bounds. It’s sort of like the Unified Field theory in physics. Eventually everything will be explained in one formula.

For those coming in (like this reviewer) with limited knowledge of the comic books, Scott Lang (Paul Rudd) is actually the second Ant-Man. The first, Dr. Howard Pym (Michael Douglas), withdrew from public life after the death of his wife and his concerns that his research might be misused. Now his former protégé Darren Cross (Corey Stoll) is planning on doing just that and Pym has recruited Lang to don the ant suit for a special mission.

The suit allows him to compress his atoms (insert scientific mumbo-jumb0 here) so he can get real small while retaining his full-size strength. Various things happen, including two scenes in the closing credits, which let us know we’re being set up for further adventures of Ant-Man on his own and in the world of Captain America and Iron Man. For the comic book geeks, this is manna from cinematic heaven.

As for the rest of us, this a lesser but fun effort. Paul Rudd is not Robert Downey, Jr., but he does have a wry sense of humor (and co-authored the script). His character is motivated by his love of his young daughter, but being an unemployed ex-con it’s not easy to get a job and pay child support. It doesn’t help that his ex (Judy Greer) is living with a tough cop (Bobby Canavale).

It’s a mix of action, humor, and some parental drama. Scott misses his daughter. Howard has issues with his daughter (Evangeline Lilly), as well as surrogate son Darren. In these days where CGI makes special effects seem so effortless, scenes of Scott surfing through a water pipe on the backs of an army of ants seems par for the course. It’s in the cleverness of the final fight scene between Ant-Man and Darren, now in the guise of Yellowjacket, that the film fully comes alive. They battle across a toy train set and we see one heave the engine in a near death blow against the other tiny character only to see the lightweight plastic toy then clatter to a halt.

What’s interesting is watching Douglas fit right into this world as Howard Pym. As with Robert Redford in last year’s “Captain America: The Winter Soldier,” he takes the material as seriously (or lightly) as the moment requires, without the sense of, say, Marlon Brando in “Superman” (1978) obviously slumming it. For those eager to tie this in to the larger Marvel Universe, there’s appearances by Howard Stark (John Slattery), Peggy Carter (Hayley Atwell), and the Falcon (Anthony Mackie).

“Ant-Man” will likely play just as well on the small screen–so to speak–but for those needing their Marvel fix between “The Avengers: Age of Ultron” and the reboot of “The Fantastic Four,” it will do.•••

Daniel M. Kimmel is a veteran movie critic and author of a host of film-related books. His most recent book is “Shh! It’s a Secret: a novel about Aliens, Hollywood and the Bartender’s Guide.” He lives in Somerville, Massachusetts.